In this blog post we discuss how Dursan contributes to renewable energy and greenhouse gas reduction by improving the ketonization process used to convert wastes into jet fuel.

Wastes, such as animal manure, wastewater sludge, and food wastes can be converted into jet fuels rather than be left to rot in a landfill and produce methane, a powerful greenhouse gas.   This blog post highlights recent work from a group at the National Renewable Energy Laboratory, where research is focused on transforming volatile fatty acids from this waste into usable fuels via a ketonization process.

Decarbonization of fossil fuel reliant industries is of upmost importance in the battle to combat climate change.  According to the EPA, in 2019, the largest economic sector for emissions was transportation, clocking in at 29% of the U.S. green house emissions.  The automotive industry has taken steps toward alternative energy sources with a recent push toward more electric vehicles, but aviation is much more complicated than cars or locomotives.

According to an article written by a professor at the University of Sidney: “aircraft are much more sensitive… increasing the mass of a car by 35% leads to an increase in energy use of 13-20%. But for a plane, energy use is directly proportional to mass: increasing its mass by 35% means it needs 35% more energy”

When it comes to planes, our current battery technology, and associated mass, is not sufficient, and thus many research initiatives have looked toward alternative fuels rather than alternative power types.

One attractive area of study is the conversion of various wastes into usable fuel. Sources such as animal manure, wastewater sludge, and food waste contain volatile fatty acids (VFAs) that can be converted to usable fuel in relatively high conversion yields.  The process involves converting the VFAs to ketones which are subsequently converted to hydrocarbons which are suitable for fuel use.  This blog post will explore a recent publication that investigates kinetics and reactor design for the ketonization process and where Dursan can aid in better conversion rates.

The ketonization of VFAs is currently not a process that is industrially performed.  This process, shown in Figure 1, couples two carboxylic acid molecules to form a ketone.  Carbon dioxide and water are both byproducts of this process.

The process is typically done as a gas phase reaction in a packed bed of either zirconium dioxide or titanium dioxide.  Recently, a group from the National Renewable Energy Laboratory (NREL) looked to better understand the kinetics of the reaction as well as optimize the reactor design.  Their work can be found in this study* published in Industrial & Engineering Chemistry Research Journal from the ACS publishing group.  Full reference is available at the end of this blog post.  The paper does a great job of exploring the variables of importance for the reaction and the best design for high conversion rates.

One area of interest with the design was the description of the packed-bed reactor.  The study noted the following:

The authors of the paper were contacted to see what role the Dursan® coating was performing in the reactor, and they described 3 main areas of concern that Dursan fixed in their experiments:

The VFAs of interest are all acidic and placed in the stainless steel packed bed at high temperatures. This is a prime environment for corrosion of the stainless steel which could compromise to integrity of the system, especially considering these reactors go to high pressures. 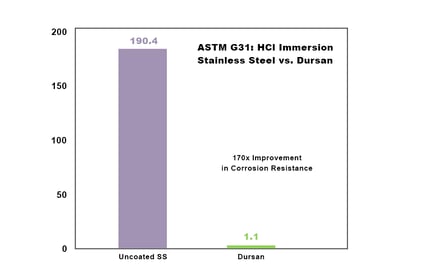 2. Chemical adsorption to the walls of the reactor system

The optimized concentrations of the acids assume little to no adsorption to the walls of the reactor. Carboxylic acids are notorious for sticking to steel surfaces.  Comparative analytical testing (below) shows that Dursan acts as an inert barrier, preventing or significantly reducing adsorption and loss of active compounds. (SilcoTek® data shown below)

Additionally, the paper discusses how water (a byproduct of the reaction) must be removed as best it can be.  The water can coat the oxide packed bed and compete with reaction sites where the ketonization occurs.  The hydrophobic surface of Dursan will physisorb far less water than bare stainless steel.

3. The metal ions and metal surfaces can be catalytic

At 350°C (the optimum temperature for this reaction to take place), stainless steel can be very catalytic toward hydrocarbon decomposition.  By blocking the catalytic metals such as nickel or iron from interacting with the VFAs and resulting ketones, the conversion yields, >98% in the study, can remain high. 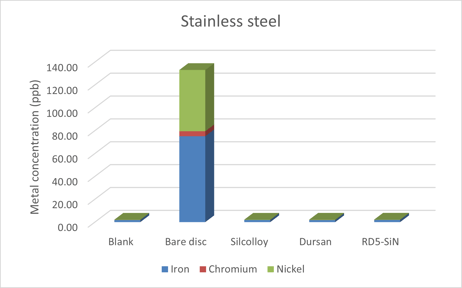 The authors also discussed the overall greenhouse gas savings that can be realized via the conversion of wastes into jet fuels.  It could be easy to look at this process and think, “Hold on second, aren’t you still just burning hydrocarbons and releasing carbon dioxide into the atmosphere?”  Yes, that is true, but looking at the big picture, there is a savings of greenhouse emissions.  These wastes would typically end up in landfills where they breakdown into carbon dioxide and methane.  Methane is a very potent greenhouse gas, and according to the article, this process saves about 55 grams of CO2 equivalence per megajoule of energy produced.  For reference, a gallon of modern jet fuel contains approximately 120 MJ of energy, so replacing one gallon of jet fuel will average a savings of 6.6 kilograms of CO2 emissions.

SilcoTek’s Dursan coating can enhance steel surfaces with a corrosion resistant barrier.  Dursan is also proven to reduce the adsorption of chemicals to surfaces, and protect against unwanted catalytic side reactions.  In this blog post we reviewed a recent paper published by a group at the NREL that used Dursan to enhance the performance of VFA ketonization. They explored the kinetics and reactor design for the ketonization of VFAs where, through these beneficial Dursan characteristics, coated reactors were crucial for the success of these studies and are suggested to be used on similar reactors in the future.

To stay in touch with the latest in material science, subscribe to our blog, or follow us on LinkedIn.

Improve Your Process Get Our
E-Book