A cellphone accidently left on "record" discovers the secret behind a Marketing Team Christmas lunch.

We take a break from our normal blog topics to tell a little Christmas story.

The following is a transcript from a cell phone recording that inadvertently exposed the secret behind how Christmas came close to not happening this year, and how the SilcoTek Team came together to save Christmas!

(Disclaimer: no Santa, Elves, reindeer, or Marketers were harmed during this incident.  SilcoTek does not condone the use of alcohol for Santa, Elves, and especially reindeer!)

(Second disclaimer:  When we're not helping Santa, we help customers improve the performance of their products.  Learn how we make products better by subscribing to our email and blog.)

Voice later identified as Jim:  "Come on Higgins we're not going to hold the door all day."

Allie: "Where are we going for the annual bestest day of the year lunch!"

Luke: "Well it's a surprise, but I'll tell you we'll be dining at one of the finest restaurants on the planet!"

Allie, Jim, and Marty looking at each other came to the same conclusion.  Applebee's...

Luke: "I don't want to ruin the surprise but (happily tapping on the steering wheel in anticipation) I can't hold back my excitement any longer!!!  We're going to Applebee's!!!!"

Jim: "Dude, we always go to that place, what's different this year."

Luke: "Well when I was there last week with Geoff, they had new menu items and a great special!"

Jim: "Luke, you go to Applebee's twice a month!  How can there be anything new?"

Luke, becoming more animated: "Well let me tell you, the wings are fabulous this time of year, the steaks are tender as can be, and I'm really taking a liking to the Fiesta Lime Chicken!"

As the team's eyes glazed over, Allie began to feel a slight hint of depression creep into her soul, she wondered out loud "this better not be the start of a buzz kill to my Christmas!"

Jim, sensing an opportunity for a change, spoke first: "Luke, maybe we could try something a little different this year."

Luke: "Wwwhat do you have in mind?"

The Team in unison: "Any place!"

Marty:  "Maybe a change is a good idea, but I will miss that Bloomin' Onion, that was really good!"

Marty: "Oh..  but that endless salad, that was especially yummy!"

As Luke pulled into the Applebee's driveway, Allie spotted a place just across the street.

Allie: "Right over there (pointing while practically lunging into the front seat).  That place!  The North Pole Bar and Grill."

Jim: "Let me check the Yelp reviews.  Huh, nothing.  All I'm getting is a short video of snow, a bunch of frolicking elves, and Christmas music..."

Luke (getting out of the truck): "Huh.  It's snowing but only around the restaurant.  Must be some sort of crazy snow microburst or something...  And look, they haven't finished their Christmas decoration.  Look at the display on the roof.  Just a sleigh, no Santa or reindeer, not even lights.  It's Christmas Eve, you'd think they'd have their decorations up by now!  Maybe we should stick with Applebee's."

The SilcoTek Marketing Team cautiously approached the red and green building that looked like it was built by a Bavarian on a bender.  The bar looked as if it were plopped on a small hill, leaning precariously to one side, like a toddler gave up on a sandbox project.  Still Allie persisted in coaxing the group into the bar.

As they opened the door (that smelled and felt like it was made of gingerbread), the team broke through the bright light of day into the darkly lit bar, Luke thought out loud, "I wonder what the specials are".

The vibe of the place was distinctively festive, as their eyes adjusted to the dimly lit bar, Jim was the first to pick up on what everyone else was missing.

Jim, leaning over in a whisper to Marty: "Hey, I think that's Santa over there!"

Marty: "Where?  (pointing) The tall thin guy playing pool with those frolicking short people all dressed in green suits? (must be a convention or something).."

Marty: "The guy playing pinball and chatting with that nice old lady dressed in lederhosen and wearing a leather jacket that says Santa Mama?"

Marty: "The off duty cop having a chardonnay?"

Jim (exasperated): "NO!  Look at the far end of the bar.  The chubby guy, slumped over, white hair, beard, dressed in a red suit, sitting next to that reindeer!"

Allie quickly marched over to Santa and introduced herself.

Santa, looking glassy eyed, looked up and mumbled.  "You'll get your gift, just place an order.. with Amazon."

Allie: "Santa!  You're drunk!  What are you doing getting tipsy on Christmas Eve!  It's the most important night of the year for you and your team, who, I might add, all seem a bit tipsy."

Donner, sitting next to Santa while nursing a beer, looked over and snorted.

Santa peered over his glass and mumbled: "Christmas may be a little late this year....."

Allie straining to hold back both the disappointment and anger yelled: "WHAT?  No way!  Santa you've been doing this Christmas gig for since like the 3rd century!  How could you give up now?"

Will SilcoTek be able to help Santa?  Click below to watch NORAD track Santa! 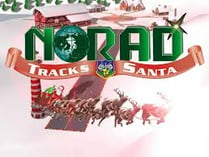 Santa:  "Well we had to throw in the towel on our SantaZon project.  That wily Jeff Bezos just out produced and out delivered our little team.  He's got thousands more elves (aka retired seasonal workers) and a more refined delivery network.  Heck, he's even joyriding into space!  They fly farther, higher and faster than my little sleigh.  (head in hands) He just kept squeezing us!  I've dealt with all sorts, mafia, bandits, even the Kardashians!  But I've never been squeezed like this.  We had to close the Hackensack operations center and consolidate to the North Pole."  (Donner nodding in agreement.)

"Then Jeff contacted us.  He made an offer we could not refuse...  So we're backing out of the distribution portion of Christmas.  We'll still be responsible for good feelings and marketing but (sobbing) we'll no longer be squeezing down chimneys and taking that savory nibble of home made coo...kies...waa...aa........"

"I think pretty soon we'll all need jobs, I think Wendy's is hiring.  Even better, my elves tell me that SilcoTek is one of the best places to work in Pennsylvania.  Do you have any openings?"

By this time Allie had had enough.  Face flushed, she grabbed Santa's furry lapels and began to mercilessly shake the fear out of Santa, all the while launching into a diatribe of frustration and coaching, with each shake she exclaimed.  "Look Santa there's no way I... Am... Going... To... Let... You... Give... Up!!!  I've been working from the SilcoTek roof for years flagging you to all the kids in the county!  Freezing, wet, 3AM!  All for nothing????  You can't let the kids down and you're not letting me down!  And there's no way I'm trusting Jeff Bezos to get me that NordicTrack treadmill I want!!!!!  Santa, you have one thing Jeff Bezos doesn't.  Magic!"

Jim: "Yeah, who's going to get me that bow and arrow I've been writing you about?"  (Donner staring).

Luke: "And who's going to get me that gift certificate to Applebee's?"

Marty: "And who's going to get me that all-in-one-screwdriver?  (Santa, Donner, and Marketing Team slowly turning, staring at Marty)...

Marty: "What, they have a new color.  I need it for my collection."

Allie, turning to Jim.  "Get those Elves sobered up!  I have a plan!"

Jim: "But who'll steer the sleigh?  Maybe Donner can navigate."

Santa, with a sweeping of a hand: "Never trust anyone named Donner to steer you in the right direction. "

(Donner, sneering at Santa, tried to take his last drink as Jim pulled the mug from his hoof.)

Jim: "OK Elves, Mrs. Claus!  Last call.  Let's get some coffee into this group.  Open those windows and air out this place.  I'll call for the IV service to speed up the recovery."

Allie: "We need to sober up Santa pronto.  I think some warm milk and cookie therapy will help.  Barkeep, a gallon of milk and 12 bags of cookies please."

After the 9th bag of cookies, Santa's spirits lifted and the old Santa began to reappear.  He began to think outside the box exclaiming "Ya know, we can beat Jeff at his own game.  There are thousands of containers stuck off the Los Angeles coast.  All we need to do is have the Elves execute a classic snatch and grab on a few select containers and everyone will get their gifts!  And SantaZon will survive!"

Jim: "But Santa, isn't that illegal?"

Santa: "Well it is stretching the law a bit, but hey I've got a lot of pull at the docks.  Half the Elves were recruited from the docks!  The other half are ex-Congressmen and plumbers."

After about an hour of planning and cookie binging, Santa was back to his old self.

Santa: "HO, HO, HO!  Thanks to SilcoTek® for all your help!  You always go above and beyond to help the customer!  That Plus 1 Service idea really works!  And of course everyone at SilcoTek will get an extra special something in their stocking this year!"

Then Santa packed up the sleigh and headed off to California to raid the shipping containers.

And Allie?  She got a big hug from Santa and the forever thanks from all at the North Pole!

Luke:  "Ok who's ready to order?  All this saving Christmas has made me hungry!"

North Pole Bar and Grill server:  "Are we ready to order?"

Everyone at SilcoTek wishes you a bloomin' great holiday season!

And a happy and productive New Year! 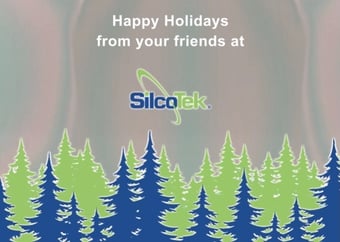 A Holiday Message From Santa and SilcoTek

Have The Happiest of Holidays!

The Best of SilcoTek's Holiday Blog 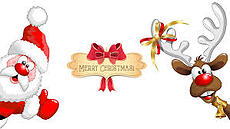