What Does Dursan Have to Do With Improving Beer?

In honor of Octoberfest we test our silicon coating to see how Dursan® can improve beer clarity and taste.  Hey somebody has to do the hard work!

What Does Dursan Have to Do With Improving Beer?

In tribute to the Octoberfest tradition, we hoist a glass to science and study the effect of stainless steel surfaces on pilsner style brew quality, haze, and taste.  For now, our test is purely empirical but the evidence is persuasive!

People have been brewing beer for thousands of years.  The first evidence of brewing dates back to between 8500 BC and 5500BC.  From the start, brewers have evolved the brewing process to make beer better.  The big advance in brewing consistency, the beer purity law of 1516, helped to advance and rationalize the art of brewing.  With the advent of quality tools like gas chromatography (GC) and high performance liquid chromatography (HPLC) and other analytical tools, the study of beer and beer quality has become more science than art.  In this blog we discuss beer haze and how silicon coatings can further improve beer quality.  And as an added bonus, we taste test the beer to compare the overall impact of a coated surface on the brew quality of pilsner style beer.

Haze has been a sometimes wanted, sometimes unwanted part of the brewing process from the beginning.  Haze is caused by several factors including:

Early studies as far back as 1920 have attempted to document haze in beer.  Reference to haze go back even farther, an 1897 study titled "A hitherto Unrecognized Kind of Beer Turbidity" sheds light on the perplexing nature of preventing haze in beer.  You can read an early paper about haze here.  Today, brewers have long mastered the brewing process. Large scale brewers and craft brewers are able to control haze and encourage haze as needed, depending on the style beer brewed.  Beers like Hazy IPA from Devils Backbone exemplify how brewers can control or encourage just the right amount of haze.

However that control can come at a cost.  For some beers, like pilsners, haze is minimized by adding silica gel treatments.  Silica gel is used to remove haze causing proteins by adsorbing target proteins.  Additives like polyvinyl polypyrrolidone (PVPP) are added to adsorb polyphenols.  The PVPP/polyphenols are then filtered out of the beer prior to bottling.  All this effort adds complexity and cost to the brewing process.

Fortunately inquisitive minds continue to study beer and brewing to advance the technology further.  That's where Dursan comes in.  Beer enthusiast, Jesse Bischof wondered if metal ion contamination, a known contributor to haze, could be controlled by coating the stainless steel fermenting vat with Dursan.  We focused on our Dursan coating for this test because Dursan is NSF approved and has passed USP Class VI testing.  Dursan is also known to reduce metal ion contamination in many environments.

To test this theory, R&D and Manufacturing teamed up to brew and compare the effect of Dursan coated surfaces on the clarity and taste of a pilsner style beer.  And in celebration of Octoberfest SilcoTek employees we're lucky enough to "test" each batch!

Beer enthusiasts in R&D and Manufacturing (Jesse Bischof and Kevin Morrison) teamed up to brew a classic pilsner using 2 fermenters.  Fermenter number one consisted of a standard home brew stainless steel vat.  The second stainless steel fermenter was coated with Dursan®.  The stirrer was also Dursan coated to assure the test batch did not come in contact with stainless steel.  The 2 test beers were brewed using the same pilsner recipe (a 3.5% abv Czech pilsner) and then bottled.  The beer then aged for about 2 months. 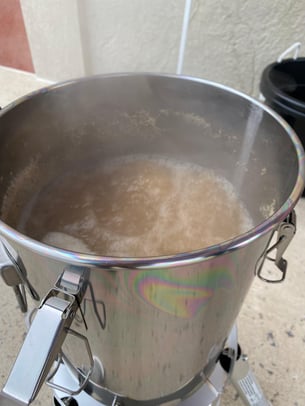 The odd numbered beakers are samples taken from the steel fermenter, and the even numbers are samples from the Dursan® coated fermenter.  Samples were taken at 3 points during the brewing process.

You can see how much clearer beaker 6 is over the uncoated sample in beaker 5.

SilcoTek® employees volunteered to participate in the taste test.  It's a tribute to our team's dedication to science that so many team members volunteered to sample free beer.  The rigorous test really put the coated vat vs. uncoated vat to the test.

Participants were given 3 beers in opaque cups.  Opaque cups were used to eliminate the visual queue of any physical differences between the beers.  Remember the Dursan coated beer is clearer.  This test focused on taste and smell only.  Why are there 3 glasses of beer?  Didn’t the R&D and Manufacturing Team only make two beers?  Yes!  But the team tested the beers using a method commonly used in sensory analysis called the triangle test.  Watch a video describing how a triangle test works.

Preliminary results indicate that most participants were able to distinguish between the beers.  I personally preferred the Dursan® coated vat because I found that the pilsner finished with a cleaner taste.  But hey that's just my opinion.  Others preferred the stainless steel vat because it did have a longer aftertaste and lingering finish.  But in the end the taste was distinguishable, regardless of preference.  We'll review the final tally as part of a follow-up post on this topic.

Why Does Dursan® perform better than stainless steel? 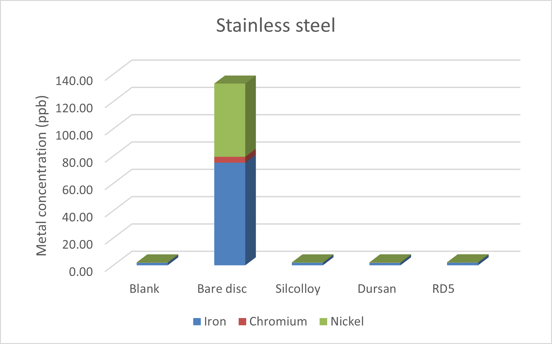 The clarity results indicate that metal ions may be leached into the beer during fermenting which in tern may be causing proteins to bond to the metal ions, resulting in agglomeration and haze.

The summary below demonstrates how metal ions can be readily leached into flow path solutions and how Dursan® coated surfaces (right column, green) prevent metal contamination under all conditions tested.

We're content to test and taste beer on a regular basis.  In the interest of science of course!  But it's time for real science to take over.  The R&D Team is currently analyzing the beer via ICP-MS, UV-Vis, and HPLC to analyze things like metal content, antioxidant content, phenolic composition, and measure other flavor compounds to better characterize differences between the Dursan coated vat and the uncoated vat. 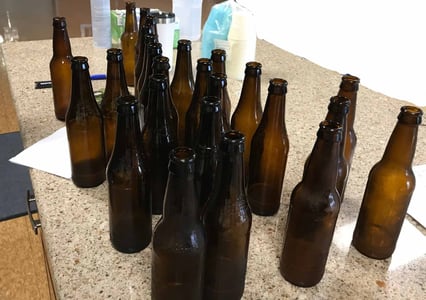 We'll be updating our experimental results in the coming weeks to keep you abreast of continuing advances in brewing technology.  In the meantime Ein Prosit!

To stay in touch with the latest in coatings and material science, subscribe to our email and blog, or follow us on LinkedIn.

How Dursan And FTIR Can Improve Stack Sampling

Get the latest in coating material performance: