* Image credit NASA Jet Propulsion Laboratory
Get the latest data and learn about SilcoTek® coating applications for your industry!  Watch our anti-fouling webinar.

Hall-effect thrusters have been used in space exploration applications such as satellites and medium-sized robotic space vehicles since the 1970s. These engines work by ionizing a propellant and accelerating these ions with an electrostatic potential to produce thrust. Xenon gas is the most commonly used propellant due to its high atomic weight (easy to ionize) and its chemical inertness; however, storage requires low temperatures and high pressures.

NASA Glenn Research Center has demonstrated that Hall-effect thrusters operating with iodine as the propellant can perform at the same thrust and efficiency compared to state-of-the-art xenon thrusters. Iodine has many logistical benefits over xenon for use in these engines. Iodine stores at 3 times the density of xenon, it can be stored at less than 15 psi, whereas xenon requires 2500 psi, and iodine is much more abundant than xenon, and therefore cheaper.

Despite these benefits, there are challenges to consider with material compatibility. Because iodine is a halogen, it can react with and oxidize surfaces, causing damage to process systems and in NASA's case may react with iodine Hall-effect thruster propulsion system materials.  Very little is known regarding iodine reactivity with the wide range of spacecraft materials used in a vacuum environment. This information would also be useful to the nuclear industry as iodine is regarded as one of the most hazardous fission products from a fuel nuclear reactor. NASA has developed an experiment to study the interaction between iodine and a variety of common spacecraft materials. In their tests, they have included protective coatings like corrosion resistant Silcolloy® and high durability Dursan® coated coupons for evaluation.

“The goal of this work is to begin studying the chemistry, structure and micro structural, and kinetic properties of materials and coatings exposed to iodine in a relevant environment to spacecraft technology development. For the study described in this report, five common spacecraft and test facility metals and two coatings were selected. The results of this work are pertinent to vacuum facilities and some regions of space since these environments contain molecular or atomic oxygen at very low levels.”

The iodine exposure test was conducted in a tubular furnace that was held at 300°C and flushed with 145 ml/min of argon gas along with 1 mg/min of iodine vapor. The testing exposed the coupons in triplicate for 5, 15, and 30 days. The coupons were monitored via weight measurements, XRD, and SEM. Weight change can be broken into three distinct groups: the steels which gained weight, the aluminum alloys which lost weight, and the coated coupons that had no weight loss or gain except for Silcolloy on 304 stainless steel which gained weight past the 15-day measurement period (Figure below).  (Read a summary of the study.) 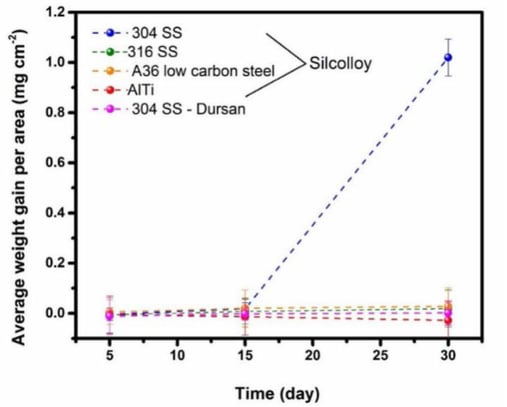 The authors concluded that Silcolloy® and Dursan® were effective in protecting the coupons that were studied.

Why are SilcoTek® coatings used in the MS sampling systems like those used on the Cassini probe?  Because no other coating has both the inertness and durability to withstand the harsh environment of space and assure samples taken don't react with the instrument flow path.  SilcoTek coatings like Dursan® beat other industry deactivation technologies and inert surfaces.  The chart below compares the breakdown/loss rate of various deactivations.  The Dursan coating minimized sample breakdown, improving MS sampling results while offering a high temperature stable, high durability surface.  Get our ultimate guide to inert sampling and learn more about how SilcoTek coatings improve sampling performance.

SilcoTek coatings act as an inert barrier, preventing catalytic or chemical interaction with the underlying surface.  For example nickel containing substrates catalytically form carbon deposits (coke) from petrochemical media. Causing build-up on the surface.  Coatings like SilcoKlean® or Dursan® bond to the surface and change the surface energy and inertness, preventing chemical adhesion and adsorption of the substrate.  The coating's low energy surface prevents the attachment of flow path chemicals to the surface.

The European Space Agency successfully completed a 6.4 billion kilometer space flight and landed their Rosetta Philae craft on the surface of comet 67P/Churyumov-Gerasimenko for in situ analysis of the comet.  In order to precisely measure the comet's chemical composition, ESA needed an inert surface capable of withstanding the hostile environment of space.  They chose SilcoNert® 1000 (Silcosteel®) for the job!

Coat the entire sample pathway, in space or on earth.