Coating Applications for Medical Diagnostics and In Vitro Devices

Prevent Test Errors Due to Sample Carryover and Contamination

Dursan is officially certified by NSF, the National Sanitation Foundation, and is FDA compliant.

The benefits of an inert flow path in medical diagnostic equipment include:

Get all the information about the benefits of SilcoTek coated analytical flow paths. 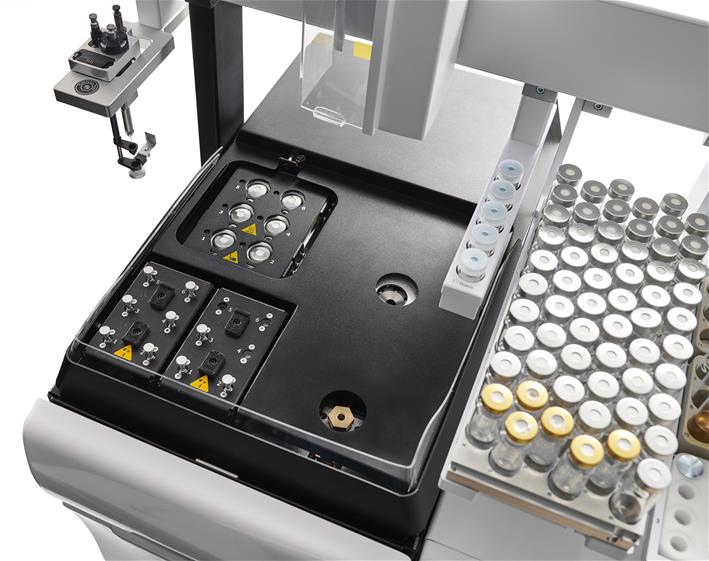 SilcoTek coatings are used to prevent interaction of the test analyte with the flow path surface.  Our inert coating, Dursan, prevents adsorption, reactivity, and flow path corrosion.  Applications include:

PEEK and other fluoropolymers have been used in medical diagnostic applications for years.  However PEEK has some limitations:

To compare the effectiveness of Dursan coated stainless steel and fluoropolymer (Teflon® AF1600) surfaces an Abbott/SilcoTek study published in Applied Surface Science measured the protein retention of sonicated and unsonicated surfaces.  Using QCMD analysis, the study compared the mass of pre and post exposure rinsed samples.  After rinsing, the human plasma proteins were completely removed from the Dursan and AF1600 surface (as shown by a return to baseline frequency).  However sonication did change the surface retention characteristics of AF1600 which resulted in retention of proteins on the surface as seen in the comparative graph below. 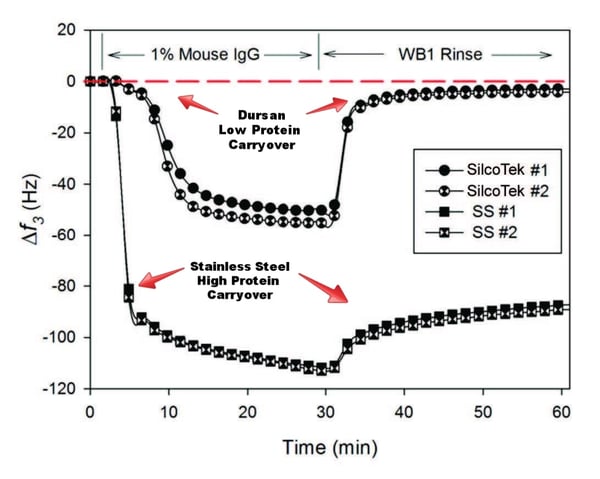 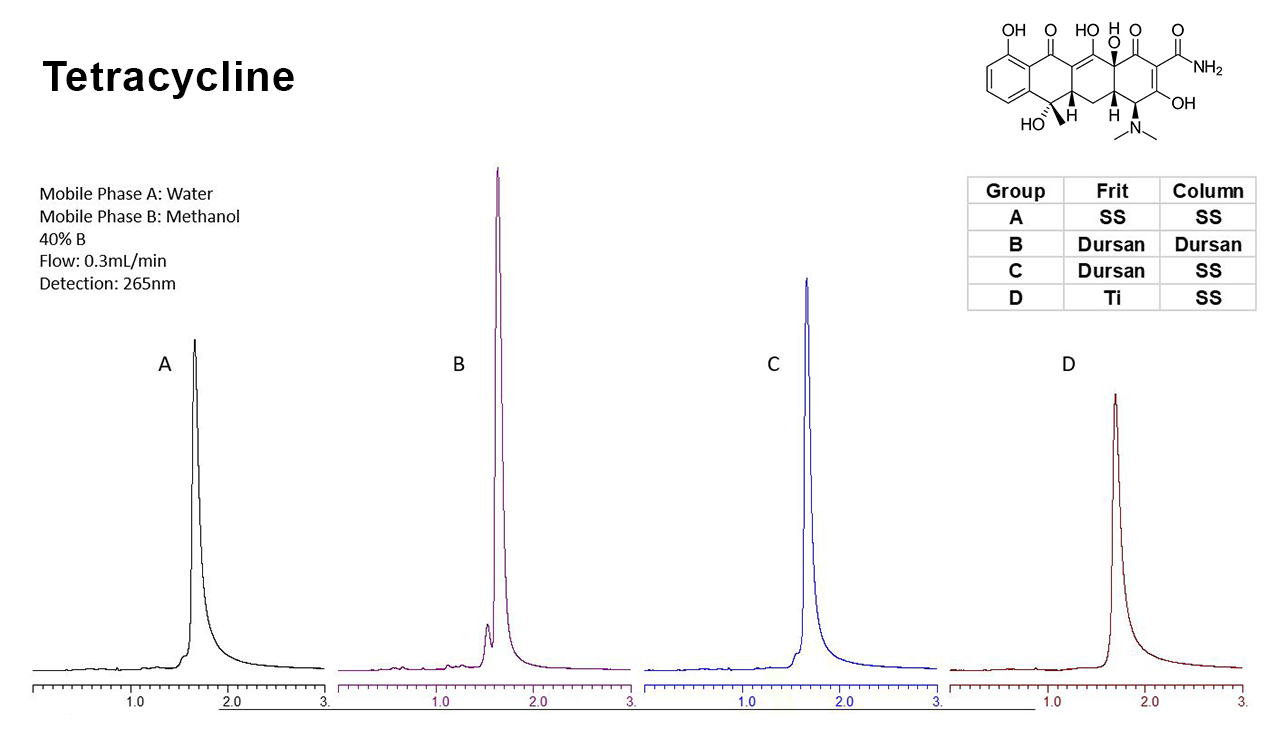 Ciclopirox is an antifungal agent typically used in topical fingernail and toenail infections.  We compared the performance of 2-pyridinol-1-oxide, the chelating part of this antifungal agent, on various coated and uncoated surfaces.  The chromatograms show significant loss of signal due to metal interactions in the separation.  This highlights the interaction that the column wall has with the analyte and the need for column coating. 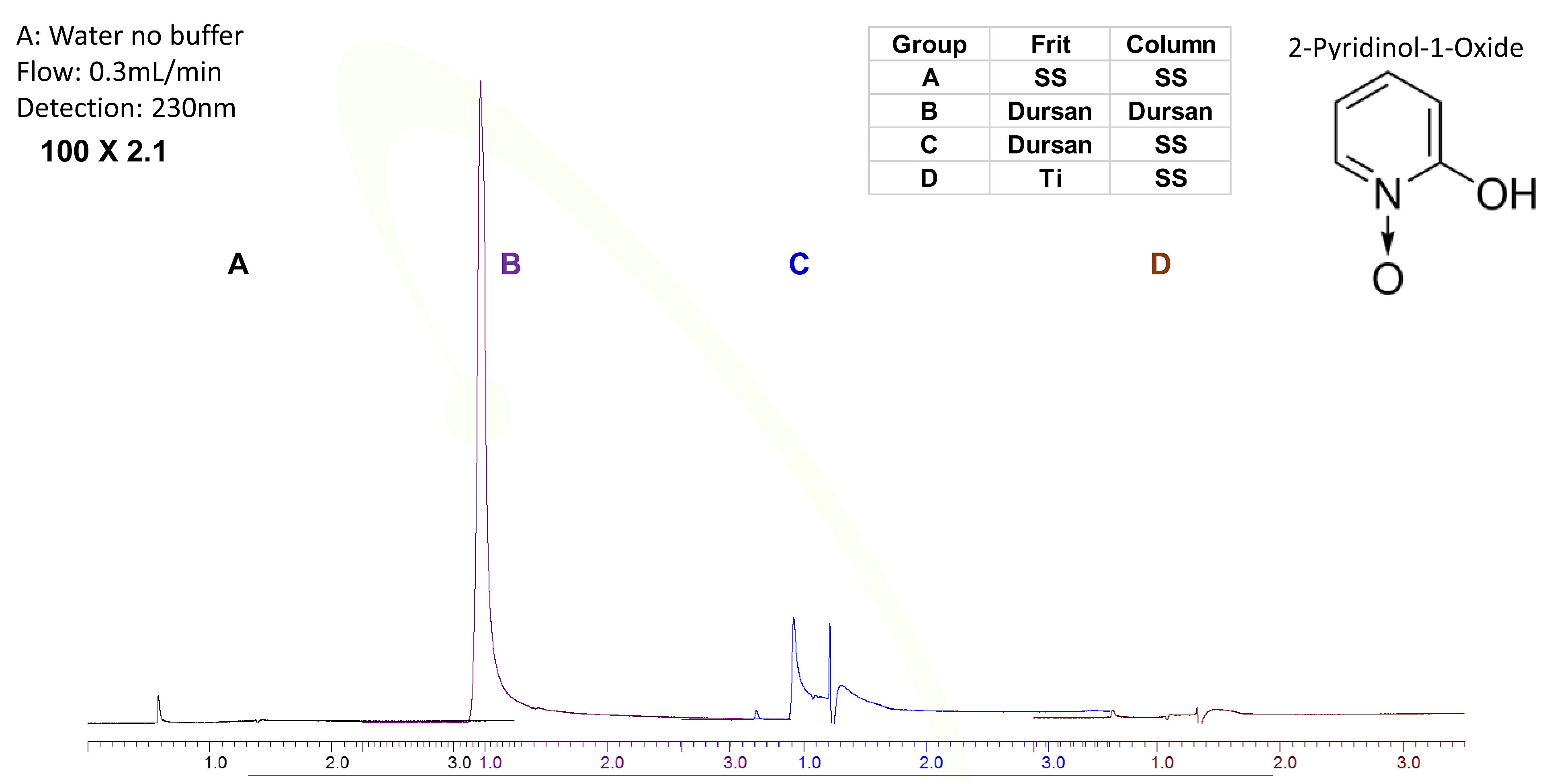 If you have a technical question about how our coating technologies will perform in your application, contact our Technical Service Team and ask the experts.

If you would like to buy a coated product directly from the manufacturer, go to our Buy Coated Products page.

To get the most out of your HPLC system coat all reactive sample flow path components and systems.

Want to test our coating before you buy?  Get a free test coupon or arrange for a free test evaluation.