We breakaway from our usual content and add a little international intrigue to an otherwise boring subject of export control.*

In this blog post we discuss the boring subject of export control and back up that boring topic with a tale of international intrigue that exemplifies why export control is absolutely necessary.

About Export Controls and Why They Exist

Some form of export control has been in existence for just about as long as the US has been around (actually controls started in 1775).  Back then it was more about sticking it to King George (or visa versa) more than anything else I suspect.  Today, preventing the wrong products or information from getting into the wrong hands is very necessary.  Reasons why there are export controls on products and services include:

Back during the cold war the United States and the Soviet Union were engaged in a sometimes deadly competition for control of vital sea lanes.  The Soviets possessed a great number of fast and deep diving submarines that were capable of ambushing and potentially sinking US ships.  The one disadvantage of Soviet sub technology was that Soviet subs were noisy.**

The US also had submarines, not as many, not quite as fast, and certainly not as deep diving.  But they did have one advantage, they were very quiet.  You see noise travels long distances in water, thousands of miles in fact.  So sensitive passive sonar can pick up and track a noisy ship or sub pretty much anywhere it's travelling in the ocean.

Quiet US subs could lurk in the depths and track those noisy Soviet subs.  This was a big advantage.  Such a big advantage, in fact, that it pretty much negated all the other advantages the Soviet subs had.  US sub drivers were confident they could deter and if needed sink Soviet subs, protecting US ships and keeping sea lanes open in time of conflict.

Then around 1985 the US listening posts started to have trouble tracking some Soviet subs.  About that time the Soviets began to take steps to quiet their subs.

Submarine noise comes from 2 primary sources.  The sub's power plant/machinery and the propeller tone and cavitation when the propeller moves through the water.  The Soviet Lazurit Design Bureau finally got serious about quieting the sub machinery when they designed and built their new Sierra class submarines.  The new sub design greatly reduced machinery noise but the US could still track the sub based on the propeller noise.  That fateful day in 1985 the US realized that now the propellers were also hard to track.  That's where export control comes into play.

In the 70's and '80's the US Navy spent millions perfecting ways to quiet noisy propellers on their submarines.  They used a special, and very large 9 axis CNC machine tool to build propellers that did not cavitate and had minimal tone noise emission.  The same type of specialized propeller machining tool that made US subs quiet was also made by the Japanese firm Toshiba.  In the early 80's Toshiba was pushing for increased revenues and had no qualms about selling $17 million dollars worth of complex machine tools to the Soviets.  The Soviets found the Norwegian company Kongsberg also willing to build the numerical controls (the brains) of the systems.  Toshiba got around export controls by claiming the tools were 2 axis, then an acceptable export to Soviet Block countries, rather than prohibited 9 axis CNC machines.  Consequently the export was treated like any other common machine tool and evaded international export scrutiny, which for this shipment happened to not very extensive or effective.

Over the next 18 months, Japanese and Norwegian Engineers and Technicians installed and groomed the machines for production.  Read the entire story here.

The Consequences of an Export Control Failure

After the US began to suspect something was up, subsequent investigations by various agencies discovered the shipments.  When confronted with the export violation, Toshiba executives were evasive, dismissive and elusive but ultimately authorities broke the case and uncovered all details of the shipment scheme.

In the end, investigations found that executives from Toshiba and Kongsberg were willing to risk Western national security for a $17 million dollar deal.  The aftermath and consequences of that single export control failure lingers on even today.

Penalties and impacts to the manufacturers included:

The real cost was to the US Taxpayer and The United States Navy who, over the following years, spent well over $1billion dollars to upgrade its passive sonar technology.  Not long after the incident the Soviet Union collapsed, but today Russian submarines continue to get quieter and the US continues to pay the price.

Steps to take when implementing an export control system.

Companies manufacturing goods or services that are potentially dual use or strategically important should investigate if they need to implement an export control system.  Even when dealing with individuals who are located within the United States but are perhaps green card holders or are foreign nationals working in the US, export controls may be required.

There are a multitude of US agencies that deal with export control.  You can start with the International Trade Administration (ITA) and Bureau of Industry and Security (BIS).  BIS lists all US export related agencies.

That seems like a lot of information and tasks to do, but much like any other standard, like ISO 9001, once implemented, the process becomes second nature.  To the customer, all that organization and compliance may exhibit itself in the form of a questionnaire form or a few additional questions asked by your customer service representative.  The added time for the customer should be minimal but that little bit of effort on everyone's part can pay big dividends in preventing a costly export failure. ***

Let us export our coating knowledge to your products and processes!  To keep abreast of the latest in coatings and coating technology, follow us on LinkedIn or subscribe to our email and blog.

*** Note: we're not lawyers and this is not legal advice.  We're not advising or recommending any action, just informing our readers.

Learn How Our Coatings Can Improve Your Products: Download Our
Latest E-Book 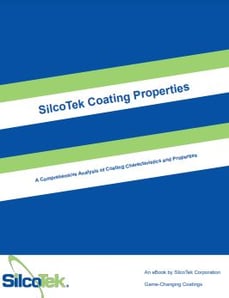