How Reliable Sulfur Detection Is Leading to Cleaner Air Worldwide 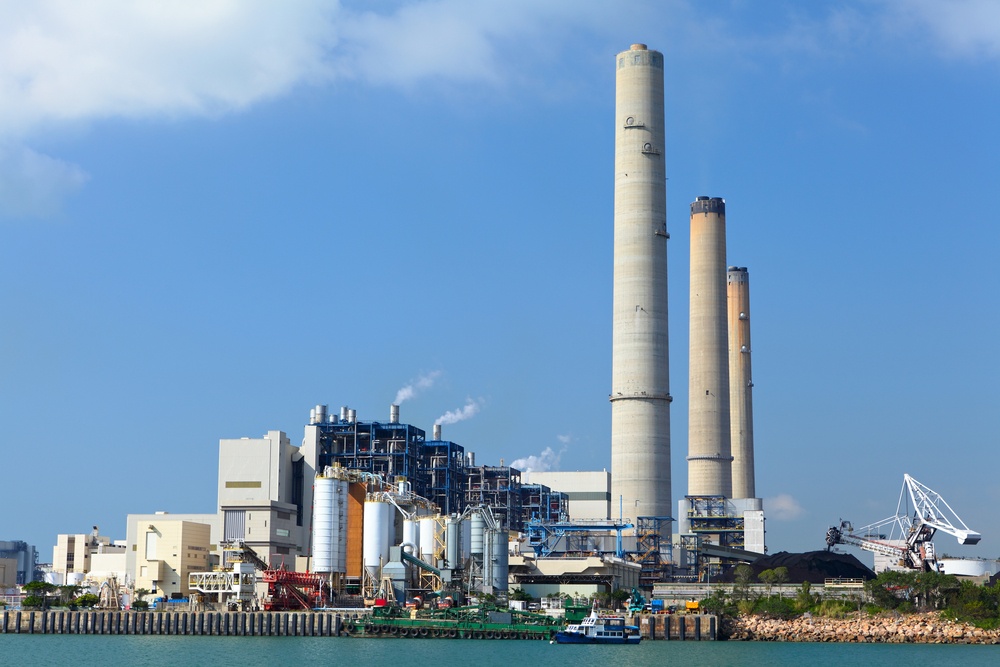 I visited friends in Pittsburgh a few years back.  We toured lots of great places around the city but what struck me the most was a single black and white photo at the inclined plane on Mount Washington.  The photo (taken circa 1940 judging by the cars) was of a vibrant downtown Pittsburgh at what appeared to be early evening.  The cars had their headlights on and the scene was gray, dark and gloomy.  What shocked me was the caption:  Downtown Pittsburgh at 12 Noon!  In those days the air quality was so bad that cars needed to turn on their headlights to avoid collisions.  Forget about blue sky, you were lucky to see where you were going!

That made me think back to a story my mother told me about growing up in the Pittsburgh area.  If she slept with the window open by morning the window sill would be black with dirt and there'd be black under her nose.  She said my Grandmother had to have the wallpaper cleaned yearly just to keep up with all the black particulates from the near by mills.  I can't imagine growing up in that kind of air pollution.  Unfortunately a good portion of the world's population is all too familiar with this scene.  But things are changing.

The world is catching on to the benefits of clean air.  China for example has enacted aggressive new standards to improve air quality.  They recognize the benefits of improved health, a stronger economy and a better functioning society.  They realize that fewer air quality related fatalities, less flight cancellations, and fewer pollution related plant shut downs benefit quality of life and the quality of China's economy.  In fact, the world seems to be getting the idea that clean air is important.  Just look at the number of new tighter air standards being enacted throughout the world:

What's the primary objective of all these new air quality standards? Reduction of pollution effects through the detection and control of particulates, low level sulfur (SOx), and NOX emissions.

Remember that image of Pittsburgh at noon?  Well all that darkness was caused by smog.  The grey haze was formed by sulfur dioxide (SO2) and to a lesser extent SO3 as well as oxides of nitrogen (NOx).  But it's not just the dark cloudy appearance that's a concern, SOx and NOx exposure have a real and lasting effect on the environment and humans including:

Sound bad?  How about this statistic.  In 2015, 9 million deaths world wide were attributable to pollution, mostly due to smog.  In China nearly a third of deaths are caused by poor air quality.  Given the facts, it's not surprising that air pollution control has become a major initiative throughout the developed world.

What's the key to control of SOx and NOx?  Reliable detection.  Without a way to sample and compare pollution levels, measuring the effectiveness of air pollution controls like scrubbers and clean fuels would be impossible.  Unfortunately sulfur is a tricky element to detect because it tends to stick to all sorts of metals, glass, and ceramics; which are common materials used in sample flow paths.  You can learn how to prevent sulfur sticking and adsorption by going to our Inert Coatings page.

Why is sulfur hard to sample and detect?

Because sulfur and sulfur compounds tend to stick to materials commonly used in sample flow paths.  If the sulfur gets trapped in the flow path, the instrument can't accurately record the data, making control of scrubbers and processes difficult at best.  Here's an example of how sulfur can get lost in a tube.  Shell and O'Brien conducted a study where a sulfur compound was injected into a tube.  Then they waited for the detector at the other end to "see" the sulfur.  They waited... and waited... and finally after 90 minutes some sulfur hit the detector!  Here's a graph of the test results. 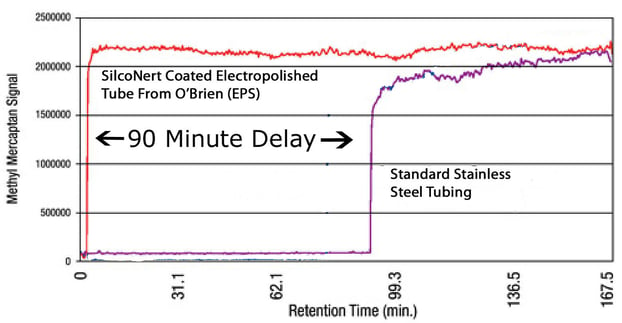 The first red line is a graph of the sulfur response when that tube is coated with SilcoNert®.  Under the same test conditions the response is almost immediate!  Virtually no sulfur was lost in the tube.  When all the sulfur makes it to the detector, the plant or refinery can accurately control emissions or their process; making for a better product while minimizing sulfur related air pollution.

How big a problem is sulfur adsorption?  Well if we look at the US EPA Tier 3 standard, a 10ppm sample will be completely lost in a relatively short length of sample tubing.  If the sample were exposed to a high surface area metal (for example if a sample were filtered through a sintered metal frit), most if not all of the sample would be adsorbed onto the surface.

Here's an example of how dramatic sulfur loss can be.  A sample of hydrogen sulfide, carbonyl sulfide, and methylmercaptan were injected onto a GC column through a 3 inch long stainless steel liner.  During the brief exposure to the stainless steel liner, the sulfurs adsorbed onto the stainless steel surface.  The adsorption was so complete that the detector was not able to see any hydrogen sulfide (H2S) or mercaptan (image below).  If we rerun the test using a SilcoNert 2000 coated liner, the H2S and mercaptan are clearly picked up by the detector. (second graph). 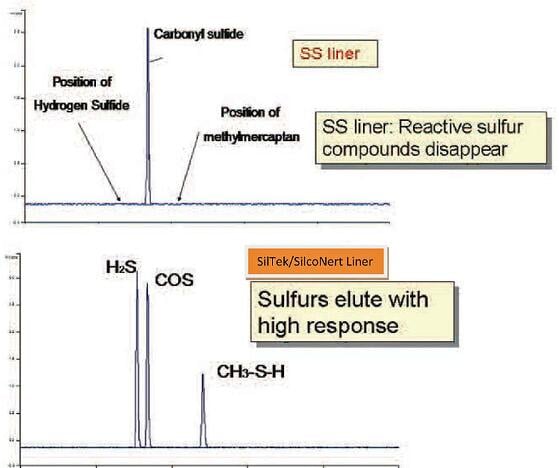 Our inert CVD coating, SilcoNert®, provides a barrier between the sample and the reactive stainless steel surface.  That allows the sulfur or NOx sample to pass right through the flow path without interacting with the surface, delivering the entire sample to the detector.  Our inert coating benefits include:

Sometimes it's not about how fast you can deliver the sample but how long you can hold the sample.  When field operations staff take a grab sulfur sample (be it from the well or from the refinery hydrotreater) they can run into sulfur adsorption problems.  The stainless steel sample cylinder surface will adsorb sulfur starting the second the sample enters the cylinder.  That means time is of the essence when trying to accurately assess if the well is sweet or sour or if the hydrotreater is running to spec.  Sulfur stability in a stainless steel cylinder can be measured in minutes or hours.  After that, it's likely the sample is not indicative of field conditions.  Conversely; SilcoNert® coated stainless steel sample cylinder stability is measured in days or weeks.  That means rather than rushing a sample back to the lab, field technicians can grab and hold a sample for 30 days or more with confidence that the sample is the same as when it was pulled from the field. 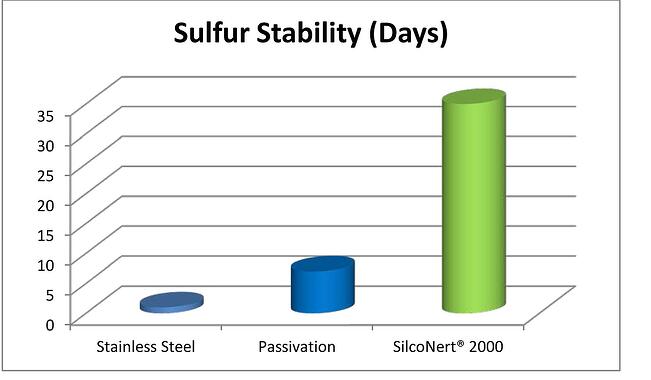 The Impact Of Tier 3 On Small Refiners.  Improved Sulfur Detection